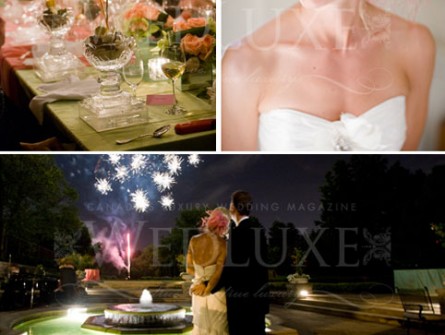 Back To All Posts

elegance and elation
The obvious choice for the couple’s wedding day venue was the incredible Graydon Hall Manor. Together, Nicole and Adam orchestrated a day that was a true reflection of them both. “Because Adam was very involved, the wedding was ‘our’ wedding. I would have designed it a little differently had it been ‘my’ wedding but I was so much happier that he was right beside me with an opinion on everything.” The couple opted for a black tie affair. Nicole wore an Amy Kuschel gown, Miu Miu shoes and a coral feather headpiece from Lilliput Hats in lieu of a veil. Her bridesmaids each wore a long black gown of their choosing which ranged from Gucci goddess style to custom made strapless. For Nicole, her favourite moment of the day came just before the ceremony. “The best moment was when I reached for my groom’s hands after I had walked down the aisle with my father. I was so elated to see him and be near him I just had to steal a kiss! I couldn’t wait for the official ‘you-may-kiss-the-bride’ moment. I really think it was the happiest moment of my life. I thought my heart was going to leap out from my throat. The sheer elation was so overwhelming I felt numb. I couldn’t even cry. I think I was in shock. Really.”

Flowers
Florist William Fulgham created a lush combination of white peonies, green hydrangeas, green cymbidium orchids and coral coloured roses set in mirrored cubes and troughs. The mirrored vessels gave the illusion that the florals were floating on the table. The table was further enhanced with clusters of lugano crystal candlesticks in varying heights, topped with white pillar candles.

Guests moved from the main garden into the dining tent where a garden wonderland awaited. The entire colour palette for the wedding revolved around a piece of Japanese paper that Nicole had seen years ago at a stationery shop. The paper motif was
used on the invitations and menus. It also inspired the coral colour theme and the garden feel of the wedding. “It was carried through every detail of the day…”

couture cuisine
The couple had some decadent surprises in store for their guests to enjoy throughout the day. The surprises started with the Lloyd Lawrence Gospel Choir during the ceremony, followed by the custom twelve-foot long ice sculpture that featured caviar, sushi, shrimp and oysters during the cocktail reception. The menu and dining experience was obviously of top priority for this culinary couple. Nicole’s business partner and Chef, Arpi Magyar, did not disappoint. “He was a guest, but refused to join in the event as he was busy overseeing every detail in the kitchen,” recalls Nicole. Highlights of the world-class menu included mouthwatering selections such as: heirloom tomatoes with buffalo mozzarella & striped beets, served with micro herbs, drizzled with olive oil, basil oil, and fleur de sel; a lobster & citrus salad with chervil, avocado and crème fraîche; a butternut squash agnolotti with roasted oranges & sage sauce and veal chops scented with rosemary, topped with a truffle aioli accompanied by truffled mashed potatoes, creamed corn, and roasted gypsy peppers. Yum!

frosted fireworks
Perhaps the most decadent and surprising treat of all was the spectacular dessert presentation. Each guest received an enormous ice-cream sundae served in an ice goblet handcarved by Ice Culture. Each of the one hundred and sixty sundaes was topped with a twenty four inch sparkler. The six tier cake by Klara Johnson of draped in white fondant and featured ribbon and handcrafted coral coloured sugar peonies to echo the florals in the centrepieces and bridesmaids’ bouquets.

In ultimate romantic fashion, the couple enjoyed their first dance underneath the starry sky. Sixty seconds into their first dance, “My One & Only Love,” the sky burst into a fireworks extravaganza. After a magnificent evening of surprises and sparkling fun, the couple honeymooned where it was all supposed to begin. They finally made it to their cabin. “It was heaven on earth.”